Home It has been … or should I say they were 30 months. Today I feel fine…

It has been … or should I say they were 30 months. Today I feel fine…

“Success is not final, failure is not fatal; it is the courage to continue that counts

It all started back in August 2015 with a groin discomfort, several doctors, practitioners and even acupuncture. It was until I saw my orthopedist Dr. Alvaro Ugalde, who through a tomography realized I had damage on my lumbar vertebrae, affecting the sciatic nerve, I required surgery.

Then by the end of the year while travelling, I started to feel continuous pain on my chest and back, we all thought it was because I strained my bones in one of those roller-coaster type game (I am terrible for amusement parks). I had a complete check-up at a hospital in Orlando and immediately they thought it was kind of a cardiac situation but it was not, they gave me oxycodone to relief the pain. Traveled back to Queretaro where we live then I went into lumbar surgery on February 4th, 2016.

There were anomalies with the surgery that included excess bleeding and longer recovery time. This raised the first alarms; usually the recovery for this surgery takes about three weeks, after that time I was not showing much improvement.

Dr. Ugalde along with his colleague Dr. Vicente Jonguitud made a deep review on my tomography, some days later the worst news I had ever heard in my life, the suspicion of a multiple myeloma.

Dr. Ugalde’s recommendation was to see immediately Dr. Guillermo Ruiz-Arguelles (Mayo Graduate School of Medicine, Minnesota, MN), a very well renowned hematologist. This took place on Wednesday and next Monday I was at Clinica Ruiz starting with the first studies.

After some tests and a PET (positron emitting tomography) Dr. Ruiz-Argüelles concluded I had a non Hodgkin lymphoma that had to be treated through six sessions of chemotherapy starting the next day; the technique to be use would be R-CHOP and we will proceed every three weeks. I had no idea what was coming.

Side effects started 48 hours after the first session. At first I had shaking chills I was unable to maintain the body heat then a fever up to 42°C that controlled with the appropriate medicine disappeared in three hours or so … but then came back the fever showed three times a day. Then nausea I was not able to try any food and had no taste at all and when I did the vomit came, even drinking water caused me to vomit. These effects last for about ten days, sometimes more, and I needed to be ready for the next session in few days.

As we went by my body changed, I started to lose weight by the third or fourth session I hardly weight 97 pounds as it is said just “flesh and bones”.

I had hair lost. Depending 100% of my family, my wife and two daughters, they fed me, took me to the shower and help me with my basic needs, I was not able even to dress myself. There were sessions that the doctor saw me so weak that he decided to apply blood packets instead of the treatment. I had three transfusions.

But there I was hanging on, by the fourth session we made a tomography that showed I was cleansed around 85% to 95%; after the fifth session we agreed to make a new PET, this will be of great importance for my future. On September 14th we saw the doctor and I was 100% clean, ¡just one more session to conclude!… Though news were no great at all, my lymphoma was controlled but the lab results show a problem on my kidneys, I had to see a nephrologist; chemotherapy had done its thing, but it did more than we wanted.

Now we are at November 2016 when we met Dr. Ernesto Sabath Silva (Harvard Medical School Brigham and Women’s Hospital, Boston, MA); his diagnosis was what we expected: chronic renal failure, both kidneys were damaged and they lost its function. My body was not able to expel its toxins, and I had several symptoms related to this, like cramps, lose of body temperature, muscle pain and a bitter taste cause by the raised on the levels of urea on my blood … and I could continue. I had to start hemodialysis. At this point, I already had gone through a kidney biopsy and a catheter placed in my jugular vein.

Chronic renal failure is a disease that shrinks the capacity of the body very slowly and affects different parts of the body. I remember one day to be at the hemodialysis room and saw Dr. Sabath arrive, he asked me if I wanted to go home and I said “yes, of course, if I could”; well, I had been there for two days and nights at the hospital …cannot remember anything at all. I had a uremic coma in which the brain is affected by encephalopathy and it loses any control of the body.

When I had the chemotherapy, my body stood, I find no other definition; through the renal stage, my body, diminished, adapted to live with the symptoms. I recovered my hair, gain some weight and was able to move in a limited manner as I got tired very easily; but the people that saw me at this stage thought I was fine … my problem was inside not outside.

The only solution for this was kidney transplant, this sound to me like a very complex surgery; find a donor, preferably alive. Dr. Ruiz-Argüelles suggested that as everything was under control on the hematology part and as all my symptoms were kidney related we should move on for the surgery. We talked to Dr. Sabath and he agreed, we saw a light; there was a solution to finish this journey.

Donors appeared, the first option was always my wife because we have the same blood type A+ as well as our daughters, but above all, my wife decided to donate me her kidney, for a reason that is not on my law to explain but to appreciate to a great extent because it was her personal decision. Besides her, I had 4 or 5 additional donors, some might apply, some will not, but just offering me their kidneys placed them in a very special consideration to me.

By August 2017 we started four key steps, my catheter was changed to avoid any infection, we met a nutritionist that will put me fit for surgery in three months, I started with physiotherapy sessions to recover muscles that were lost, completely slept and very weak, and we started the transplant protocol.

Protocol process is quite complex, it requires a review with several specialists for both donor and receptor to evaluate their health condition for the transplant. We passed the tests and were ready to proceed.

In our case, the nephrologist was as I mentioned before, Dr. Sabath. The urologist that will be making the nephrectomy was Dr. Javier Castellanos (Mayo Clinic, Scottsdale, AZ) and my transplant surgeon Dr. Alan Contreras (The Mount Sinai Hospital, New York, NY), and I cannot extent to describe his personality, charisma and experience, all I can say is that he gave me the confidence needed to go into the process.

By these dates, I calculate that I had gone into around 80 hemodialysis sessions, 2.5 hours each one, twice a week.

We established some dates and finally on Monday February 5th we went into the operating rooms at Hospital Angeles de Querétaro; my wife’s surgery started at 07:30 and by 16:00 hours we had the process concluded, I was back in my isolated room. Mariela, my wife with one kidney less and normal functions and me with one more and working perfectly. I entered to the operating room with 7.5 on my creatinine level and left it with 3.5, next day I was under 2.0. By the third day my levels were those of a normal person … what a healthy kidney can do! Now we should recover 100%, look after our health make plans and have our minds occupied in a positive fashion. 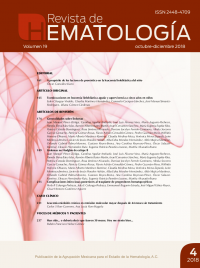