Background: Lymphomas are a heterogeneous group of malignancies, its incidence has increased from 2-3% in recent decades worldwide. The molecular and immuno-genetic development has a positive impact on the classification and prognosis of these diseases.

Objective: To describe and analyze the epidemiological trend of lymphoma patients treated at the Cancer Center of State Health Services of Nayarit, Mexico.

Material and method: A retrospective and analytical study in which records of lymphoma patients were reviewed from January 2011 to December 2014 and data were summarized using measures of central tendency, standard deviation and percentages, and also the survival of patients and the cumulative mortality were calculated with the method of Kaplan and Meier. 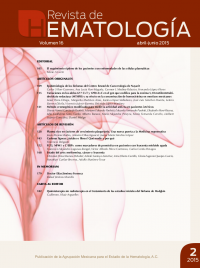